It seems that with kids, everyday is an adventure. From the time they wake up in the mornings until bedtime at night, kids are constantly exploring and having fun with their imaginations! I find that having kids is a lot of fun, I watch them go and I remember my own childhood. The times when my sister and I would go on a dinosaur dig in the backyard or when we were astronauts going on a space adventure. I like to feed their imaginations by finding products that will not only be practical for everyday use, but that can also be used for all of the adventures that lie ahead! One company that I have adored since my eldest was little is Kidorable. We enjoyed the pretty Ballerina line of rain gear with Estrella, and she loved wearing her gear out in the rain, pretending that she was a prima ballerina, dancing to her own beat in the rain! Then with Robert, he loves firefighters, and when we got him the Fireman set of rain gear from Kidorable, he had fun not only wearing his gear in the rain, pretending that he was on a emergency mission to put out a fire, but he also enjoyed wearing his jacket and boots inside while he and his sister would play dress up. As Robert has gotten older, he has found that there is more out there that interests him, like outer space. Robert is fascinated with the universe, and has decided that he might give the astronaut life a try when he grows up. Well to help feed that fascination with astronauts, the wonderful people from Kidorable sent us some products from the Space Hero line of products! 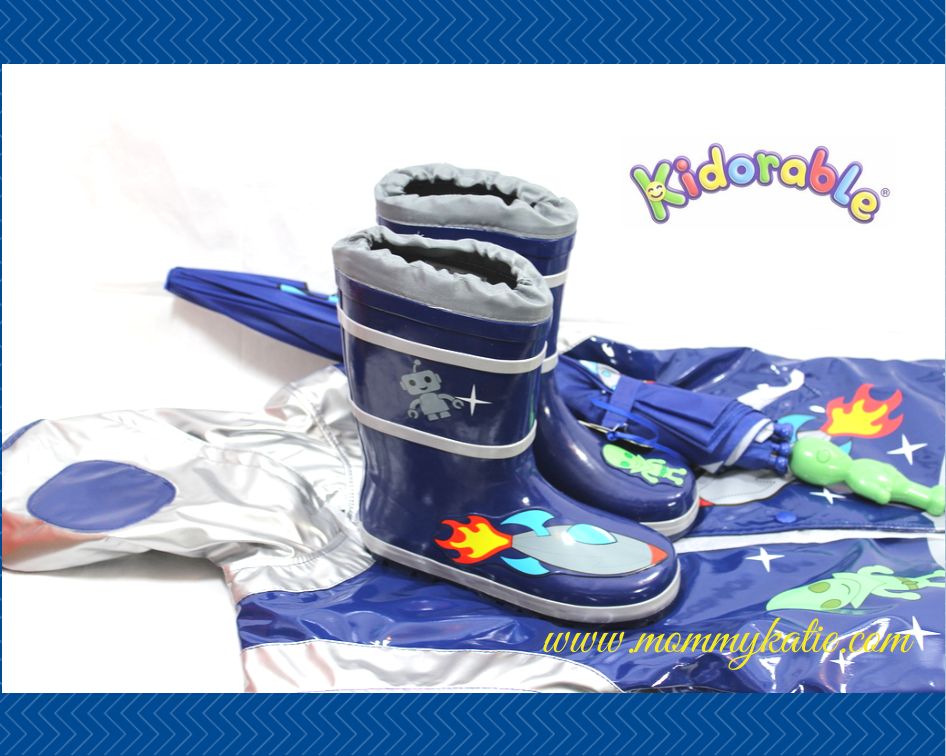 We were sent the Space Hero Ensemble to review. With this collection, Robert can wear his cool Space Hero Kids Raincoat, which is very suiting for my little space explorer, and conquer space like puddles in the rain with the out of this world, Space Hero Rain Boots! I like the hood on the jacket that not only helps to keep the head dry in the rain, but also looks like a neat spaceman head cover. Then to help set his space adventures into motion, Robert can open his Space Hero Kids Umbrella, which reminds me of those fun pop up tents. In all, Robert can have lots of fun going on his own adventures with the out of this world gear from the Kidorable line of Space Hero products! Well, to get your own little ones geared up for an adventure of their own on a rainy day, the wonderful people from Kidorable would like to give one of my amazing readers their own Kidorable Umbrella!