I was given the opportunity to do the interview in the video below, by the wonderful people at the Hub Network, as I am a Hub Club Member! All opinions are my own. 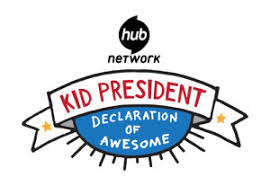 This post is one that I am very proud of and am happy to share with the world! Yesterday, Estrella got her chance to interview the star of the new kids show, “Kid President”, Robby Novak from the Hub Network! She was beyond excited when I told her she could do the interview, and I seem to have sparked something in her, because now she can not wait until the next interview or big opportunity to do something just as fun!

After I had told Estrella about the interview, she began to prep, by deciding that she would appoint herself to run for VP of Kid President, lol. I mean, she not only decided to create some fun drawings of a, “Super Corn Dog”, but she also created her own campaign material, that she kept showing during the interview.

Then, when it came time for the interview, she decided that she wanted to be the only one on screen, and asked that I let her do her thing. So, I let my Estrella, “Do her thing”, and lets just say, she did very well! So before I go on any farther, I want you to watch the interview, which I have embedded below, and tell me, would you vote for Estrella, to be a female VP? Check out the video below, and also be sure to tune in on Saturday, for a all new episode of, Kid President, on the Hub Network, (7pm ET/4pm PT)!