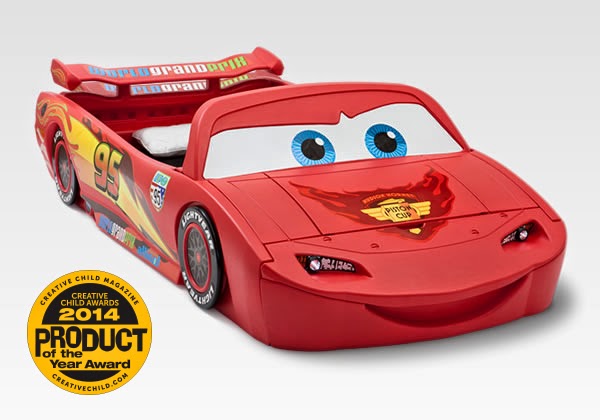 It is hard for me to believe it, but my Wyatt is 2 years old, and with having older siblings, he finds that he wants to be a big kid just like them. With Wyatt, he found that he was ready for a toddler bed at just one and a half years old, and now that he is 2, he not only wants that big boy bed, but he has shown interest in having a big boy bed in his and his brothers room. So to help with this transition, we were sent the very cool, Disney/Pixas Cars: Cars Convertible Toddler to Twin Bed from Delta Children to review.

When the big boy bed arrived, Wyatt was beyond excited, because he knew that in the boxes, was his soon to be new bed, the one that was cool and the one he will place in the big boys room, moving him from our room to a bedroom that he will share with his brother. Not only did Wyatt find the box to be exciting, but as we started putting the bed together, he and his brother began to get excited and started making room to move Wyatt in the room!

I found this bed to be one that he will not only use as a toddler bed, but one that he can grow with, and eventually use as a twin size bed when he gets older. Wyatt and his older brother Robert found this bed to be a perfect fit for the boys room. We all found that we liked that this bed resembles one of their favorite Disney/Pixar characters, Lightning McQueen, and it has a steering wheel, headlights that they can turn on and use as nightlights, a cool spoiler, wheels, and even a toy box that they can utilize until we are ready to convert this awesome bed into a twin sized bed! 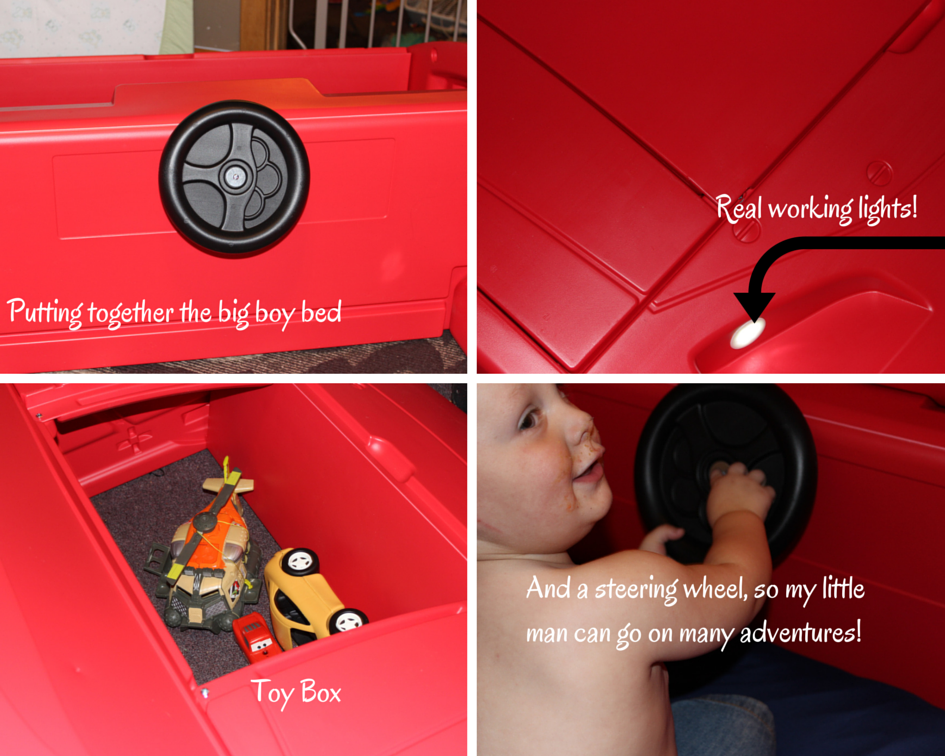 It seemed like we could not get this bed put together soon enough, and once we had it put together and ready to be moved into the boys room, Wyatt and Robert ran to get his mattress to put in the bed, to make the transition from sleeping in mommy and daddies room to the big boy room official! Wyatt then found it to be a necessity to start putting some of his favorite toys into his new toy box, so he could take his toys to go, on any adventures he might embark on in his new big boy bed!

Aside from the size, the cool features, and the conversion from toddler to twin bed, I can really appreciate the raised sides, so as my Wyatt gets used to sleeping in his own bed, in his own room, I can feel relief in knowing that he can not roll out of the bed! I also find that the conversion from toddler to twin is a easy one, by just switching out the mattress’s, and even adding a box spring if I want when he is ready. Another huge feature, that I can appreciate, and I think just about any parent can appreciate is the fact that this bed is made of durable plastic, so it is made to last. In all, making this bed one cool bed to get the toddler in your life!

So if you are a parent or caregiver to a toddler who is ready to make that transition from the baby bed to a big kid toddler bed, check out the Cars Convertible Toddler to Twin Bed from Delta Children!!

Product received, thank you to Delta Children and the PR for supplying me with a product for this review, all opinions are my own.