The time is coming, the time many like myself and my family have been waiting for. The time I am talking about is one that takes us back but into the present all at once, with the much anticipated release of the new movie, Jurassic World! To get my family geared up for the big day of June 12th when Jurassic World hits theaters, we were sent an amazing pack of goodies!

Now many of us who have kids, we have seen them in the stores and on the shelves, and if you have kids who are like my son Robert, well then I am sure you have seen those eyes widen as they check out the new collection of toys and other products that are available from the new Jurassic World movie. One such display that not only caught my son’s eyes, but mine as well is the display of dinosaurs which have the Velociraptors.

Just like in the Jurassic World movie, the raptors are fierce hunters, seeking out their next prey, and with the new line of raptor toys from Hasbro, my kids are sure to have a few fun hunts of their own! These raptors will also be a great toy to not only hold the kids over until we can go and see the much awaited release of the new movie, Jurassic World, but they will also keep the excitement going even after we go to see it in theaters! 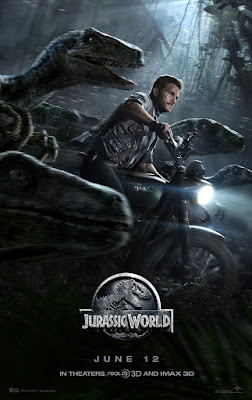 Along with the amazing toy we were sent, we also received some fun books which include the hardcover book Jurassic World: Where Dinosaurs Come to Life and the book, Jurassic World Dinosaur Field Guide. With both books, my kids can learn more about the dinosaurs we will see in the new movie, and continue to learn more about them even after we go to see the movie! In all, making it so the anticipation of the new movie, Jurassic World, a little easier in my home, and to help with easing some of the anticipation of Jurassic World hitting theaters on June 12th, I will be giving one of my readers the same pack of goodies I was sent!

Experience the wonder. Discover the unforgettable. Get your tickets to ‪#‎JurassicWorld today: unvrs.al/JWtix

Prizing and samples courtesy of Universal Pictures, Hasbro, Carlton Books, and Random House. All opinions are my own.