The movie we have all been waiting for with those iconic Peanuts characters will be in theaters November 6th! And like so many others, we are saving the date and making it a family outing so we can go together to watch the Peanuts Movie!

Like other Peanuts fans, we are excited to see the whole gang on the big screen. To watch as Charlie Brown, Linus, Lucy, Snoopy and the rest of the gang appear in their new movie and are seen like never before!

About the film
Charlie Brown, Snoopy, Lucy, Linus and the rest of the beloved “Peanuts” gang make their big-screen debut, like they’ve never been seen before, in state of the art 3D animation. Snoopy, the world’s most lovable beagle – and flying ace – embarks upon his greatest mission as he takes to the skies to pursue his arch-nemesis The Red Baron, while his best pal, Charlie Brown, begins his own epic quest. From the imagination of Charles M. Schulz and the creators of the ICE AGE films, THE PEANUTS MOVIE will prove that every underdog has his day. 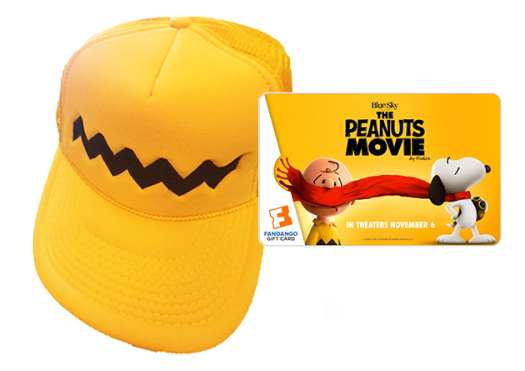 And to help with the anticipation of going to see the whole gang on the big screen, the wonderful people from 20th Century Fox would like to give one of my amazing readers a Peanuts prize pack which will include a family 4 pack of Peanuts hats and a $25 Peanuts-themed Fandango gift card!