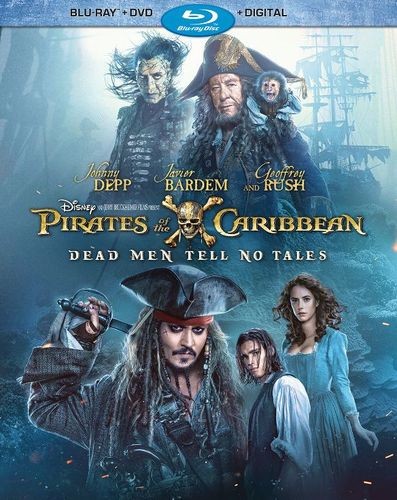 Family movie night is a night that we look forward to in my house. It allows us to each select shows and movies we are interested in and share them with everyone and also allows us to add those new must see releases to the list as well. And like many Disney fans out there, we find that when there are new additions to add from the movies from Disney, that they are a must watch in our house. So when we were sent the new Blu-Ray, Pirates of the Caribbean: Dead Men Tell No Tales to review, we were excited to add it to our family movie night line up and also add it to our Pirates of the Caribbean collection!

In this movie, you see some familiar faces as well as some new ones. One such face is that drunken pirate, Captain Jack Sparrow, who finds that another one of his debtors is coming to collect on what he owes them. You also come across some new faces, ones who are part of some of the familiar faces from the Pirates of the Caribbean series, and who find that they must put their trust in the pirate known as Jack Sparrow in order to find answers that they are seeking.

We found this edition to be a great one to go along with the other movies from the series, filled with humor, adventure and those elements of the fantasy that has enticed fans everywhere! Along with the movie that we enjoyed we also found the bonus materials to be a great addition to the story. The bonus materials that can be found when you get a Blu-Ray copy include the following:

Which in all makes the choice to add Pirates of the Caribbean: Dead Men Tell No Tales on Blu-Ray to our family movie night, a choice that we all appreciated and one you can too when you bring home your copy on October 3, 2017!!