We are continually looking for fun and engaging ways to inspire our little ones to explore  Science, Technology, Engineering and Mathematics (STEM). From reading them books about animals, construction equipment, rockets and dinosaurs, to taking trips to science museums, there is a wide variety of activities and content to be explored. To that list, we would enthusiastically recommend adding a virtual reality boxed set of books: Virtual Reality Science from Encyclopædia Britannica®. 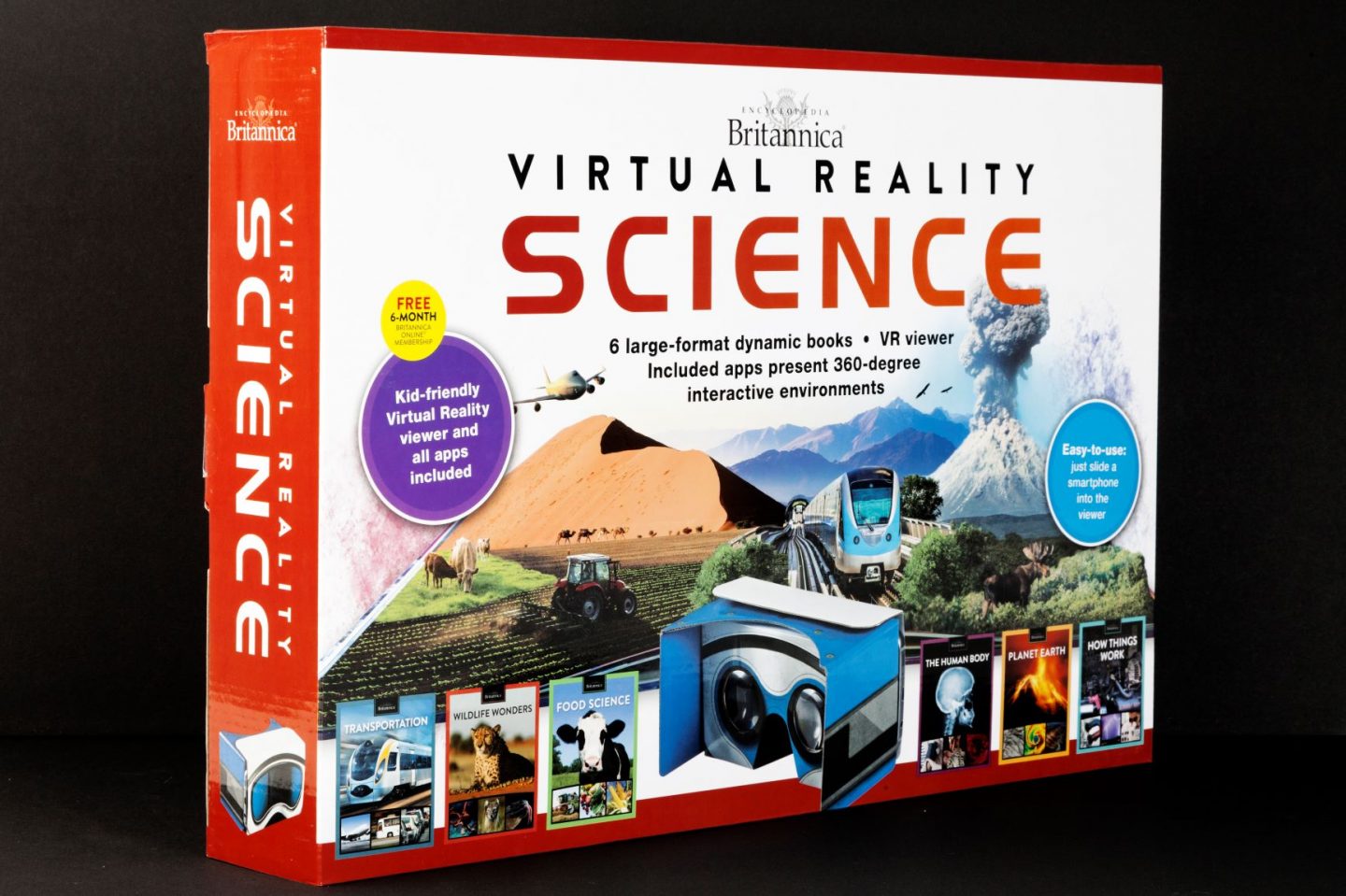 We all remember Encyclopædia Britannica® as the producers of voluminous books of fascinating information on almost any topic under the sun. Ever-improving digital technologies have allowed adding the ‘magic ‘of virtual reality (VR) to accentuate and expand the knowledge presented in this beautiful set of books focused on the topics kids love most. The set includes vetted information from Encyclopædia Britannica plus a virtual reality experience. Each hardcover book is rich with full-color illustrations and photographs, along with kid-friendly text. Also included is a 6-month free subscription to Britannica Online®.

As for the VR viewer, it is a simply assembled cardboard structure that easily opens, allowing a smartphone to be placed inside. Clear instructions offer step-by-step guidance for downloading six different free apps. Once the app has been downloaded on the smartphone, the smartphone is placed in the VR viewer.  Apps are available for iPhone or Android, though the viewer seemed best suited for standard size phones vs extra large or ‘Plus’ models. The VR viewer is worn wrapped around the head at eye level, allowing the wearer to access a 3-D environment associated with each book’s content, including interactive animations, videos, and games. Our kids were oohing and aaahing over the scenes they experienced through the VR viewer from the first glimpse and were excitedly pointing out all the different objects, associated animations and videos, they could see. While the VR quality may not be of the highest resolution, the immersive experience is pretty awesome for both kids and adults alike. 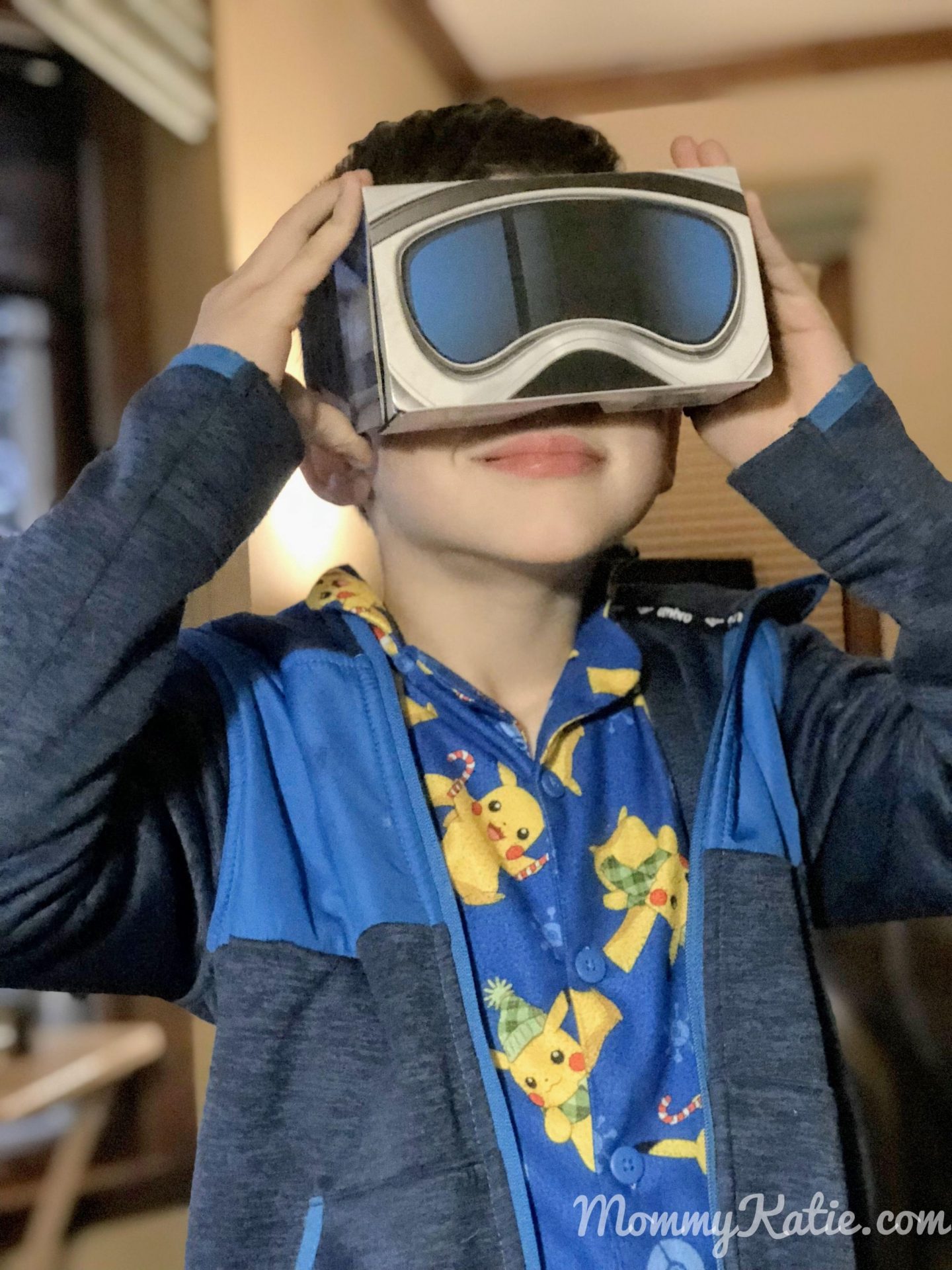 The boxed set includes six books (and their free companion apps) and is bound to include topics of interest for almost everyone. We loved that the books provided the breadth of content we expect from Encyclopædia Britannica, while the associated VR apps allowed deeper exploration of more focused topics. The titles include:

The Human Body:  In the book, find out about the human body from head to toe. The different systems of the body are explained, from the skeletal system to the nervous system, as well as information about sleep, the senses, how memory works, diseases, and more. Detailed illustrations let you see each of the body’s systems. In the app, see your immune system in action. Shrink down to see inside the human bloodstream as the body fights off an infection, and find out more about allergies and antibodies!

Food Science: In the book, explore topics related to nutrition, the history of agriculture, farm machinery, farm animals, pest control and soil conservation, and more. Vivid photographs let you see crops, livestock, and machinery from farms around the world.  In the app, explore a working family farm. Find out more information about pigs, cattle, and irrigation, and watch chickens feed!

Wildlife Wonders:  Explore the natural world through some of its most awesome and strange creatures. See very large and very small animals, animals that are adapted for extreme environments, the fastest and slowest animals, and animals with amazing abilities. From the tarantula to the blue whale, we look at animals that astound. Vibrant photographs let you see animals in their natural habitats. In the app, take a trip to the Sonoran Desert and find out more about the animals adapted to living there, including a Gila monster.

Transportation:  In the book, enjoy learning about the many methods of human transportation, from the wheel and early ships to the extraordinary machines that travel through space. Find out about everything from submarines to airships to railroads. In the app, see Kitty Hawk at the time of the Wright Brothers. See their workshop, board the flyer and take a ride on the first flight, and see a later flight in action.

How Things Work:  Learn how things work, from the basic building blocks of the universe to the most recent human inventions. Explore scientific concepts and discoveries, from sound, light, and magnetism, to human inventions including plastic, computers, and Wi-Fi. In the app, see simple machines such as pulleys, levers, and gears at work in a modern clocktower. Watch videos, play a game, and more.

Planet Earth:  In the book, explore our Earth, from its inner core to its atmosphere. Find out about volcanoes, earthquakes, earth’s natural cycles, weather, and more. In the app, see an active volcano at the time of eruption, lava, geysers, and more!

This Virtual Reality Science Box Set, which is exclusive to Costco, would make a unique holiday gift (a ‘screen’ that makes everyone happy!) and something that can be enjoyed by parents and grandparents along with the little ones (recommended for ages 7+, though our 5-year old was pretty enamored of it as well!).  It was important, however, to set a few ground rules before giving the kids their first taste of VR (e.g. stay in a defined area while wearing the viewer – no walking around!).

We are excited to have partnered with Encyclopædia Britannica® to offer our readers an opportunity to win one of these box sets by entering the giveaway below:

Entry-Form
Product received, thanks to Britannica and PR for sending us the product. All opinions are our own.